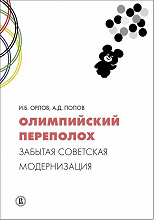 The book is devoted to the history of the 22nd Summer Olympic Games, held in the Soviet Union on July 19 — August 3, 1980. The authors consider this mega-event in two projections: through the prism of the Cold War geopolitical confrontation and in the context of internal processes taking place in the late Soviet society, using archival documents, published sources, materials of the Soviet and foreign press, memoirs of eyewitnesses. The first part examines in detail such aspects as the use of the Games as a tool of cultural diplomacy, cooperation of the Olympics-80 Organizing Committee with foreign partners, Olympic ceremonies and rituals, as well as measures taken to ensure the safety of the Olympiads. The second part highlights the influence of the “Olympic factor” on the development of the transport and information and technical infrastructure of the USSR, the Soviet service sector, as well as the peculiarities and paradoxes of the collective memory of the events of the 1980 Olympics, which gave rise to a lot of anecdotes and rumors.

This book is addressed to a wide range of readers interested in the history of Soviet society, sports, tourism and international relations, teachers, graduate students and students of higher educational institutions.