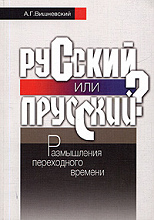 Russian or Prussian? Reflections of the Transition Period

Anatoly Vishnevsky
2005
In Russian
Number of pages: 384
ISBN: 5-7598-0305-0
What has been happening to Russia during the last 20 years? Was it moving forward or rolling backwards? How did the processes of modernization and counter-modernization go together, which of them took the upper hand? What economic, demographic, social and ethnic problems were manifested during that time in Russia, and partially on the entire ex-Soviet space, and how were they solved? Was Russia coming closer to Europe or move away from it? Is there any special “Russian path” or is Russia following the same historical path as the rest of the western world, while the ideologists of the “Russian path” are merely reproducing the old cliches of anti-western and anti-liberal critique of the G erman variety? Were the liberal and democratic reforms of the past decades irreversible or does a possibility of totalitarian revanche remain? All these questions are considered by a well-known demographer and sociologist, Anatoly Vishnevsky.