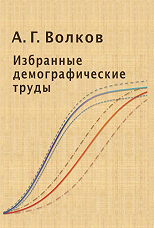 Andrey Volkov
2014
In Russian
Number of pages: 568
ISBN: 978-5-7598-1040-7
doi: 10.17323/978-5-7598-1040-7
Andrey Volkov is an outstanding Russian demographist who supervised the Departmentof Demography at the National Research Institute of the Central Statistical Agency of theUSSR (later the State Committee for Statistics of the USSR and the Russian Federation)for 40 years. In his book, Volkov investigates such fundamental problems as the subject andmethod of demography, and its place in the sciences. He also presents methods for measuringand analysing demographic processes. Volkov pays special attention to such demographicalprocesses as marriage and birth rate and raises concerns over the impact of a declining birthrate, and the opportunity to conduct an eff ective demographic policy. A large part of the bookis dedicated to the problems of family demography in Russia, its formation and evolution, aswell as issues related to forecasting and modeling family structure. Ethnically mixed familiesand international marriages are analysed using the results of population censuses andspecial surveys. Several articles are dedicated to questions concerning the collection ofcensus data in the USSR.
The book is intended for demographists, lecturers, and university students in thehuma nities, as well as for anyone interested in the demography of Russia. The book mayprove useful while taking the courses Demography, Demography and DemographicPolicy, Population Economics, and many others.
Content sample