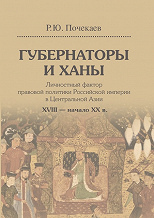 The book is designed for historians of Russian state and law, orientalists, specialists in political science and political anthropology, as well as students in these fields of study.