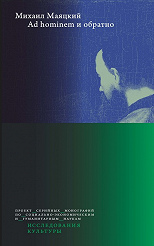 Ad hominem and Back

Why do we rather disagree than agree with each other? Why are people more likely to have different opinions than one? Can different persons have different views and still be right, all of them? All of such naive, almost childish questions concern the human being as the interlocutor of the other person and as an accomplice to the truth. It may seem that a person’s subjectivity only impedes the truth. But without the former, the latter simply does not exist. In ages passed and gone, a dispute about everything took place in the invisible presence of the Absolute (God, Spirit, Truth, History); today we have nobody else to appeal than another person (interlocutor, judge, expert, voter…). Such an appeal ad hominem, so proper to human beings, however, has always been strictly forbidden by logic and is still regarded as unacceptable discursive behaviour. Philosophy, in its search for the truth, alternatively turned its back on man, then again turned to him. In the second half of the twentieth century, logic (as the normative science of thought) began to adapt to those “too human” areas of thought where the appeal to the “man”, ad hominem, is absolutely inevitable (res publica or “human affairs”),— in the form of “informal logic”, “logic of argumentation”, etc. But under different names, the “turn to the human being” is practically coextensive of philosophy — from Socrates through Kant to neopragmatism (and so on), which does not cancel its regular rejection of “humanism” as a kind of (anti) philosophical religion of man.
Thus, the book focuses on the problem of the relationship between truth and man. The man always acted both as a subjective obstacle to the truth, and as its obligatory condition. Having chosen the ad hominem argument as a red thread, the author traces (in six separate albeit intertwined chapters) some historical and philosophical moments of this relationship — since the (constituent for the philosophy) separation from sophistry, through the complex history of the ad hominem argument and the emergence of the transcendentalist tradition to the debates on humanism in the twentieth century.