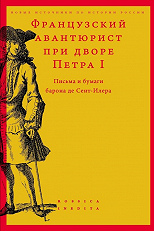 French adventurer at the court of Peter I: Letters and papers of Baron de St Hillaire. Second ed.

Edited and with an introduction by I. I. Fedyukin
2020
In Russian
Number of pages: 352
ISBN: 978-5-7598-2198-4
This volume, the first in a series titled “New sources on the history of Russia. Rossica Inedita," introduces previously unknown or little-used materials from the archives of Moscow, St. Petersburg, Paris, London, Vienna, and Stockholm. It presents the biography of a French adventurer, imposter, and founder of the St. Petersburg Naval Academy, the self-proclaimed Baron de St Hillaire. The adventures of this enterpriser span not only Russia, but all of Europe, from Portugal to Sweden, and from Italy to England. The case of St Hillaire illuminates the logic of adventurism that was so central to that era; the adventurers’ modes of operation; the opportunities for social and cultural self-reinvention at the dawn of the modern era; and the driving forces of institutional innovation in the Petrine period. The volume contains letters, projects, and other texts penned by St Hillaire himself and by the contemporaries with whom he interacted, including Peter I, Count A. A. Matveiev, and many other Russian and foreign statesmen and diplomats, writing in five European languages. The book is intended for scholars working in the fields of history and cultural studies, as well as for all readers interested in history.
Content sample