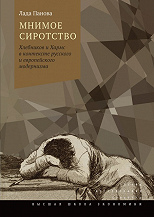 An Imaginary Orphanhood: Velimir Khlebnikov and Daniil Kharms in the Context of Russian and European Modernism

Lada Panova
2017
In Russian
Number of pages: 608
ISBN: 978-5-7598-1509-9
An Imaginary Orphanhood: Velimir Khlebnikov and Daniil Kharms in the Context of Russian and European Modernism by Lada Panova takes a new and revisionist look at the Russian avant-garde. It examines the literary works, manifestoes and life-as-art practices of Velimir Khlebnikov, Daniil Kharms and other avant-garde authors, countering various critical myths about the avant-garde (including its own), especially the notion that the movement arose ex nihilo, totally rejecting all authority or precedent and “writing from a clean slate.”
An Imaginary Orphanhood offers provocative readings of the most celebrated works by Khlebnikov (“Incantation by Laughter”, “The World in Reverse”, “Ka”, Zangezi, etc.) and of Kharms’ much discussed play Paw. In each case, analysis begins with an overview of accepted interpretations; goes on to contextualize the work by examining relevant intellectual fashions, cults and patterns of the epoch that came into play; and ends up offering some unexpected conclusions.
Among other things, this reexamination of Khlebnikov and Kharms’ works reveals the authors’ rich pre-avant-garde literary pedigrees. The demythologization of the “orphanhood”proclaimed by the first avant-gardists culminates in a discussion of Khlebnikov and Kharms’ programmatic gestures of rupture with tradition, such as the well-known call to throw Pushkin and the classics off the steamboat of modernity. These gestures aimed at deemphasizing the writers’ links to their predecessors and focused readers’ attention instead on their own grandiose selves. In reality, both Khlebnikov and Kharms emerge, unwittingly, as true sons of modernism who shared its intellectual concerns, as well as its strategies for self-advertising and for making art out of life (zhiznetvorchestvo).
The modernist manner of avant-garde thinking is also demonstrated in a section dedicated to the numerological topos in Russian literature. Khlebnikov reworked the modernist numerological repertoire, generating self-promotional mythemes and laying claim to such titles as  “King of Time” and Founder of the universal “star language.”  The sein turn provoked lively responses from Oberiu and other modernists, including Mikhail Kuzmin, Evgenii Zamiatin, Veniamin Kaverin and Osip Mandel’shtam.
An Imaginary Orphanhood targets specialists in Russian modernism and Russian avantgarde, as well as a wider readership interested in Russian literature.
Content sample