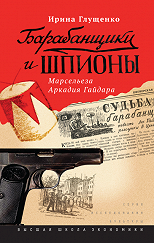 The Drummers and Spies. The Marseillaise of Arkady Gaidar

Irina Gluschenko's book belongs to cultural studies by the subject but is more of an investigation by its genre. The reader is invited to verify the existence of parallel motives in three, apparently disparate, books: “The Drummer-Boy” by Arkady Gaidar (1938), “The Gift” by Vladimir Nabokov (1937), and “Master and Margarita” by Mikhail Bulgakov (1938). Revealing hidden similarities in the books written by a Red Army officer, an aristocrat in exile, and a former White Guard doctor allows capturing the Zeitgeist of the late 1930s. The author's approach is her method of almost arbitrary, noncausal parallelisms. The investigation extends beyond the literary scope: the author deals with previously unpublished archival records relating to the same, diabolic and mundane, historic background in which the enigmatic drummer boy's story was set, which was shared by the generation reading the book, and which determined the fate of Gaidar himself.

The book is intended for historians, scholars in cultural studies, philologists, and a broader audience interested in the Soviet past and its integration into world history.